Our 2017 crew under the Lone Spruce Rills near a small thescelosaur skeleton

Each year, a team of volunteers and I conduct fieldwork in the Red Deer River Valley, studying the Horseshoe Canyon Formation. In past years we’ve worked on skeletons, bonebeds, microsites, trackways, and many other sites.

Our fieldwork is supported by the generosity of donors and the hard work of volunteers. If you’d like to support us by donation or volunteering, please contact me! A sunset over the badlands at Happy Jack’s

As part of Dr. Currie’s lab, we work every summer in Dinosaur Provincial Park and the nearby University of Alberta Mattheis Research Ranch. We prospect for new sites and skeletons, and work a few bonebeds each year. Highlights include a styracosaurus skeleton, a bonebed of ceratopsians from the Oldman Formation, and a couple spectacular skeletons that are still secret!

We also work at the Danek Bonebed in Edmonton, where students learn how to excavate and collect bone. The quarry produces hundreds of bones each year, and it’s always expanding.

I’ve been incredibly lucky getting the opportunity to work in Mongolia each year. Over the past four years, I’ve joined four expeditions to every corner of the Gobi: Shine Us Khudag, Khuren Dukh, Nemegt, and Shiluut Uul.

Eggshell from a nesting site

The badlands around Shine Us Khudag 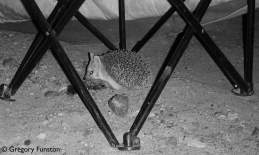 The hedgehogs were really very personable

We were only here for a couple days, on my first trip to Mongolia in 2014. These sites, in the Eastern Gobi, are from the early part of the Late Cretaceous (~100–80 million years ago). We were working on a nesting site and some other skeletons of various kinds of dinosaurs.

Khuren Dukh is an Early Cretaceous (~110–100 million years ago) site in the Northeastern Gobi, only a day’s drive from Ulaanbaatar. We spent two weeks here prospecting and excavating an iguanodontian, a psittacosaur, and several champsosaurs. This is where my best star photos come from! An impression of hadrosaur skin from the Dragon’s Tomb

The famous Red Walls of Nemegt

The Milky Way over my tent

A view of the Baruungoyot Formation from Nemegt

Nemegt is a famous locality that produces a huge proportion of Mongolia’s dinosaur skeletons. The rocks are Late Cretaceous in age, probably equivalent to the Dinosaur Park and Horseshoe Canyon Formations of Alberta. Here we worked on a bonebed of Avimimus, a mapping project, and an historic quarry of a huge sauropod. These and other studies contributed to a recent special issue on the Ecosystems of Nemegt.

The badlands at Shiluut Uul, with the mountain Shiluut Uul in the background 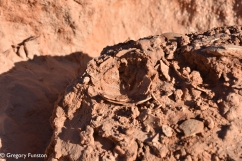 A cross-section of a fossil egg

Shiluut Uul is an understudied site near the Chinese border that has only been worked 15 days total since its discovery. It was initially discovered by the Russians in the 70s and then worked by a Japanese crew in the 1990s. We had excellent luck and found many nests of eggs, some with extra surprises, and a couple skeletons of herbivorous dinosaurs. 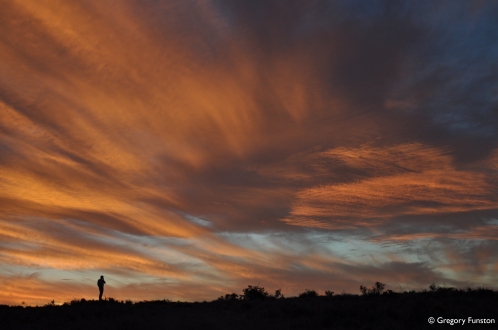 A sauropod femur jacketed and ready to collect

This little guy appeared in a shovelful of dirt

In 2014 I had the privilege of joining Dr. Rodolfo Corio at a site called Las Lajas, in Patagonia. Argentina is unique in that its rocks preserve nearly the entire record of dinosaurs, from the earliest Triassic dinosaurs, all the way to their radiation before the end of the Cretaceous. At Las Lajas, we worked on a small sauropod encased in incredibly hard rock from the Early Cretaceous. Work is still ongoing at the site, among dozens of other Patagonian sites.